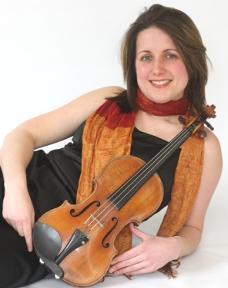 Florence Cooke performs all over the world with ensembles including Aurora, Arcangelo, European Camerata, Chroma Ensemble, Ensemble Cymru and Spira Mirabilis. Appearances at international chamber music festivals include Sommerklaenge Festival Zürich, Ludwigsburg Schlossfestspiele in Germany, Wye Valley Festival, IMS Prussia Cove, Haaglanden International Festival in Holland, Kerry International Festival in Ireland, and Banff Summer Festival in Canada, and she also founded and directed a chamber music festival in France for three years. She has won many prizes and awards, and was a student of Krzysztof Smietana and David Takeno, at Cambridge University, where she held an academic scholarship and at the Guildhall School of Music and Drama, where she held the Leverhulme Fellowship. She is a guest teacher of violin and chamber music at the Yehudi Menuhin School and the Junior Guildhall in London. A review in the Observer described her playing as ‘taut, precise and atmospheric.... appeared flawless’.

Laetitia Fédérici studied in France with Muza Rubackyte and at the Conservatoire of Cergy-Pontoise. After obtaining the Postgraduate Diploma at Trinity College of Music, she received the Master's degree at the Guildhall School of Music and Drama and in 2002 the first prize at the Gerald Moore Award. Laetitia enjoys a varied career as an accompanist and recorded a CD with violinist Survier Flores in 2016. Recent projects R. Schumann’s song cycle “Dichterliebe” a chamber music project on J. Brahms combining poetry and music in Brittany and a tour in China with the Trinity Boys Choir.