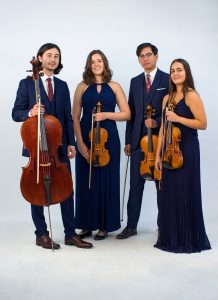 Friends joined through their love of chamber music, the Resol String Quartet formed in the Autumn of 2018 at the Royal Conservatoire of Scotland. Taking their name from the Catalan word meaning ‘reflection of sunlight’, the members of the quartet come from a great variety of backgrounds but were brought together by their shared vision to make classical music more inclusive and accessible both in the present and for the future.

In a constant pursuit for excellence, these young artists share their joy of music making and act as ambassadors for chamber music, keeping it alive in today’s society. The group feel just as at home in education settings as they do in village halls and on the concert platform and strive to blend all this work together.

In May 2021, the quartet were awarded both the First Prize, and Audience Prize in the CAVATINA Competition at the Wigmore Hall, representing the Royal Conservatoire of Scotland. In the same year, they made their Perth Concert Hall debut, were named as one of Chamber Music Scotland’s ‘One’s to Watch’ and were accepted to work with Live Music Now Scotland. They also appeared live on BBC Radio Scotland’s ‘Classics Unwrapped’. In 2022 they made their Conway Hall Debut as part of their historic ‘Sunday Concert Series’. In the same year they performed on BBC Scotland’s ‘Scotland’s People 2022’ alongside Brit Awarding winning artist Tom Walker. Recently the quartet were selected as a Britten Pears Young Artist for the year 2022-23.

The ensemble has run many of their own concert tours across the UK and Europe and continue to do so in all their seasons. Their West of Scotland tour in November 2021 was in collaboration with classical Saxophonist Richard Scholfield and brought a varied programme of original arrangements to rural island communities. This tour was funded by the National Lottery through Creative Scotland. In 2022 the quartet were grateful to receive a large grant from the same fund to support their outreach and performance activities for the second half of their 2022/23 season.

Education is an important aspect of the quartet’s work. Each concert tour sees them visit local schools in the communities in which they perform. In particular they have worked on several occasions with Oban High School and Worth School in West Sussex. In June 2022 they adjudicated the final of the Worth Young Musician of the Year Competition. The rest of their 2022/23 season will see them visiting six different schools, offering heavily or fully subsidised visits due to their grant from Creative Scotland.

The new year will see them spend a week in Aldeburgh at Snape Maltings as Britten Pears Young Artists, before a significant tour around the UK with a program of music composed by female composers from across the world in the early 1900’s. The tour includes performances in music societies and venues across the central belt and beyond, as well as visits to venues in the Inner Hebrides and in the south of England. In the summer of 2023, they will be returning to Catalonia following several re-invitations from this July.

The Programme will be:

Mendelssohn – String Quartet in A minor